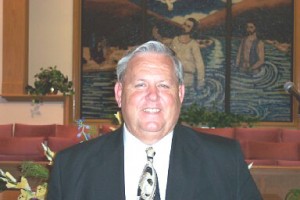 Roger Pinnix was born January 9, 1949 to Albert and Vinnie Pinnix. He has one brother, David Pinnix, also of Kernersville, North Carolina. Brother Roger continually expressed his father was the greatest influence in his life, as he was a man of prayer and believed in godly living.

At the age of seven, in the mission of Fellowship Baptist and under the preaching of Brother Carl Lackey and the drawing of the Holy Spirit, he accepted the Lord as his Savior at an altar of repentance.

Answering the call to preach at the age of twenty-one, he began preaching in rest homes, cottage prayer meetings, and on the streets. One year later, at the age of twenty-two, he was asked to fill in at a mission located on Graves Street in Kernersville, North Carolina. The name of the mission was Welcome Door Baptist Church.

Starting the mission was Brother Coy Nance. However, a few months later, Brother Nance became ill, asking Brother Roger to come and help at the mission. Within a few weeks, Brother Nance went home to be with the Lord. In September 1971, the church voted Brother Roger in as their pastor. To the Glory of God, he has remained the Pastor of Welcome Door Baptist Church until he retired.

Brother Roger felt his greatest lessons were learned from the living example set forth by his father, Albert Pinnix, again expressing that his father was “the greatest Christian” he had ever known.

Welcome Door Baptist Church presents Jesus as the only way to Heaven, and the answer to both young and old. We stand fast in our belief of the Virgin birth of our Lord, His sinless life, His dying in our place, His burial and resurrection, and His soon returning for His church. We teach and preach only from the King James Version of the Bible. Welcome Door Baptist Church is an old fashioned, Bible-believing church and blessed to have some of the best music of any church.

Welcome Door Baptist Church is a church that still believes in the old-fashioned worship of the Lord. We respect God’s house and believe it is set-aside for one purpose – to worship the Lord. Welcome Door Baptist Church is not a recreational facility. We preach salvation by grace and separation for the child of God. We preach against sin and we preach the great love of God for all mankind.

Brother Roger retired as Pastor of Welcome Door Baptist Church on December 31, 2016 after over 45 years as Pastor, and went home to be with his Lord February 23, 2020.